One thing great about competitions like this is that you get exposed to all sorts of activities that you never knew existed before. Like stick juggling – it’s quite an interesting physics study in rotational dynamics.

Since a set of juggling sticks isn’t something that you can just get from your nearest supermarket, I thought it might be cool to make a set from scratch. After all, how hard can it be to decorate up a bunch of sticks?

Rather surprisingly, there aren’t that many how-to guides out there about how you actually go about making a set. Here’s three methods I found:

Hockey tape method: Hockey isn’t a common sport around here, but I figured tennis racket tape would work as a substitute. Except that one small roll was about $12, which was a leetle bit more than I was thinking of spending…

Electrical tape method: A variant of the above, but some quick tests showed that electrical tape was too smooth and not grippy enough.

Rubber tube method: Old inner tubes are about as elusive as hockey tape!

Then by chance, I spotted this at a neighbourhood store: 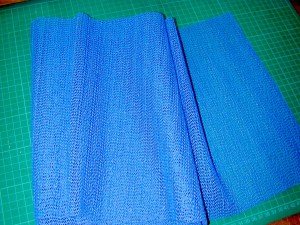 An anti-slip mat – now that should be grippy enough for a flower stick!

I’ve no idea how suitable this homemade set would be for advanced tricks, but it’s certainly good enough for one to learn the basics, and even spin a propeller or two. 🙂